Why haven’t any of India’s Mightiest made it to the big screen? Super Commando Dhruv, Nagraj, Captain Vyom, and Shaktimaan want answers, and they find them in this hilarious video by the Indian comedy team Screen Patti.

Make sure to check out Screen Patti’s Youtube channel here

This blog series was inspired by edx alumni Varun Rajagopalan and his awesome posts in the “Heroes Risen” facebook group.

In a culture so innundated with American superhero heavyweights like Superman and The Avengers, its easy for me to forget that there are heroes in other countries with the same amount of influence in their respective regions. Thankfully, with the ease of distribution only the internet can provide, heroes from across the globe are starting to make a big splash in the world wide comic book game.

This series will cover some of the most iconic superheroes from around the world, with diverse and intriguing back stories unique to each region’s culture. 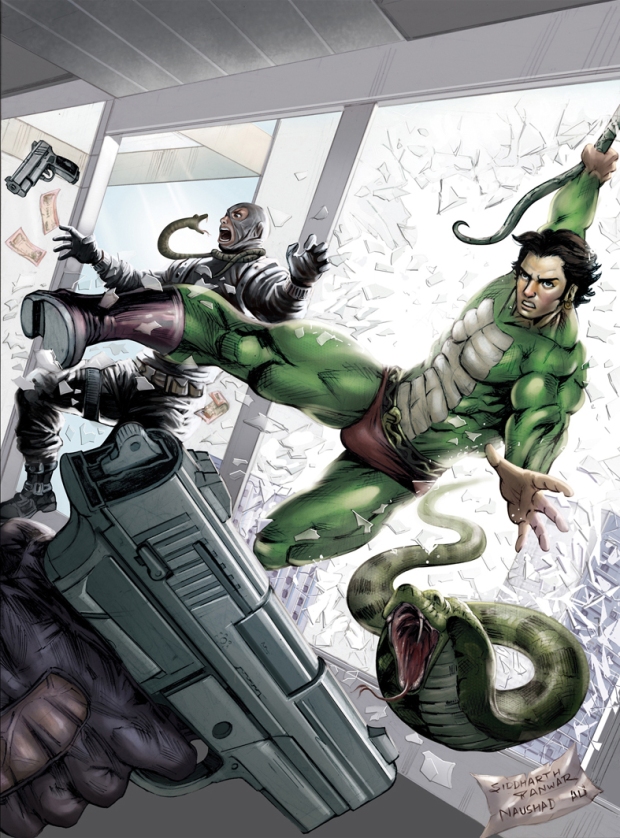 Comic Book Origin:
Converse to Nagraj’s main mission, the eradication of terrorism around the world, Nagraj himself was originally utlized as a weapon of terror being bought and sold to the highest bidder to complete various missions. Nagraj’s story starts with one of these missions, and under the mind control of Professor Nagmani, was sent to steal a golden statue from a temple. This temple was guarded by devotees, snakes, and a centuries old Sadhu (holy man) named Baba Gorakhnath.

Gorakhnath and his Black Mongoose Shikangi (warriors?) were able to defeat Nagraj, leading Gorakhnath to discover that Nagraj was being controlled by Professor Nagmani via a device implanted in Nagraj’s brain. Gorahnath was able to remove the device and free Nagraj. Shortly after, Nagraj became a disciple of Gorahnath, and pledged to fight crime and terrorism all over the world.

Popularity: Considered one of Raj Comics flagship characters, Nagraj is one of the longest running superheroes and has become iconic in Indian Pop Culture.  In the late 90’s, Raj Comics attempted to bring Nagraj to the small screen with a live action series, but production was cancelled after the filming of only three episodes.  Word through the grapevine is Raj pulled the plug due to poor visual effects, but did later release the episodes for free in the Khalnayak Nagraj, Samraat, and Saudangi, trade paperbacks.

In 2006, Indiagames signed with Raj Comics to develop a mobile puzzle game featuring Nagraj and Bankeylal.  Unfortunately, I couldn’t find any other mention of this game other than shady third party app websites, so I was not able to verify if this game is live.

In 2007 there was talk of developing a Nagraj animated movie, and in 2010 a company called Planet41 was supposed to begin a mobile streaming and download service for Raj Comics animated films including the heroes Nagraj, Druva, and Doga.  Again, I was not able to find further information on this service.

Despite previous attempts to bring Nagraj to both the big and small screens, Nagraj enjoys a strong fanbase.  The loyalty of Nagraj fans can be seen in Raj Comics yearly “Comics Fest” events, and last year they celebrated 25 years with “Nagraj Janmotsav,” an event celebrating Nagraj specifically.

Now that I have finally finished recovering from my Halloween weekend, the blogging can recommence!!